When author Kentaro Miura passed away in May 2021, I felt depressed. This was the man who introduced me to a dark fantasy manga that still lives in my head since 2012. The same person who, with his magnum opus, invited me to look up knights and mercenaries in reality, sprouting my interest in medieval culture and history. Even with his death, Berserk remains an all time favorite manga for otaku fans, owing to its fantastic art and story.

Debuted in 1989 (1988 if you count the prototype), Berserk revolves around Guts, a lone mercenary in search of his former friend, Griffith, after the latter betrayed him in exchange for becoming a demon. It is set in a low dark fantasy, Europish medieval setting and so far compiled a total of 41 volumes. After Miura died, his final chapter was posthumously published in September of the same year and later resumed in June 2022 under supervision of his best friend and artist Kouji Mori. Miura’s assistants and apprentices from Studio Gaga also help continue Berserk’s publication to this day.

Berserk is not only critically acclaimed but it also serves as a big inspiration for many other mangas, animes, and video games, particularly From Software’s Souls series and Elden Ring. Looking back at the series, there was a question I pondered before. The first attention it pulled me to is the title itself. Berserk is synonymous with uncontrolled rage and violence. Reflecting the title, Guts tends to go “berserk” when killing enemies, even prior to donning the Berserker Armor in later volumes. I was initially excited when I judged the title and thought it would entirely be about a berserker man.

Funnily enough, the title also contradicts the series as despite the grimdark content, there are light and wholesome moments to balance it so it doesn’t become too edgy. One page you are seeing an innocent, executed citizen and a few pages later, you are looking at a certain, silly drawn elf. There are also moments where characters reflect their experiences and pasts, which will be talked about later. 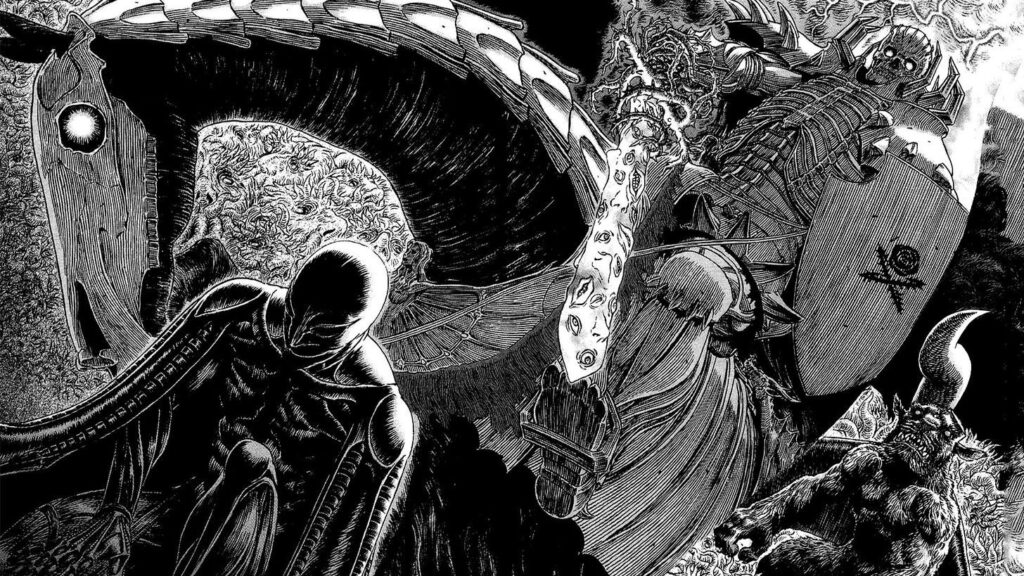 If the story is the sweet butter, then Miura’s art is the bread made of scrumptious dough. His art didn’t look like it evolved at first glance, but the more you read it, the more you realized how much dedication he put into his craft in his panels, especially the ones that spread. Many background soldiers wear their own, unique armor, every single brick of a castle wall can be seen, and you could feel the weight of Guts’ swinging Dragonslayer.

His art is something that I myself couldn’t describe enough with words. Instead, the pictures alone speak more for themselves. 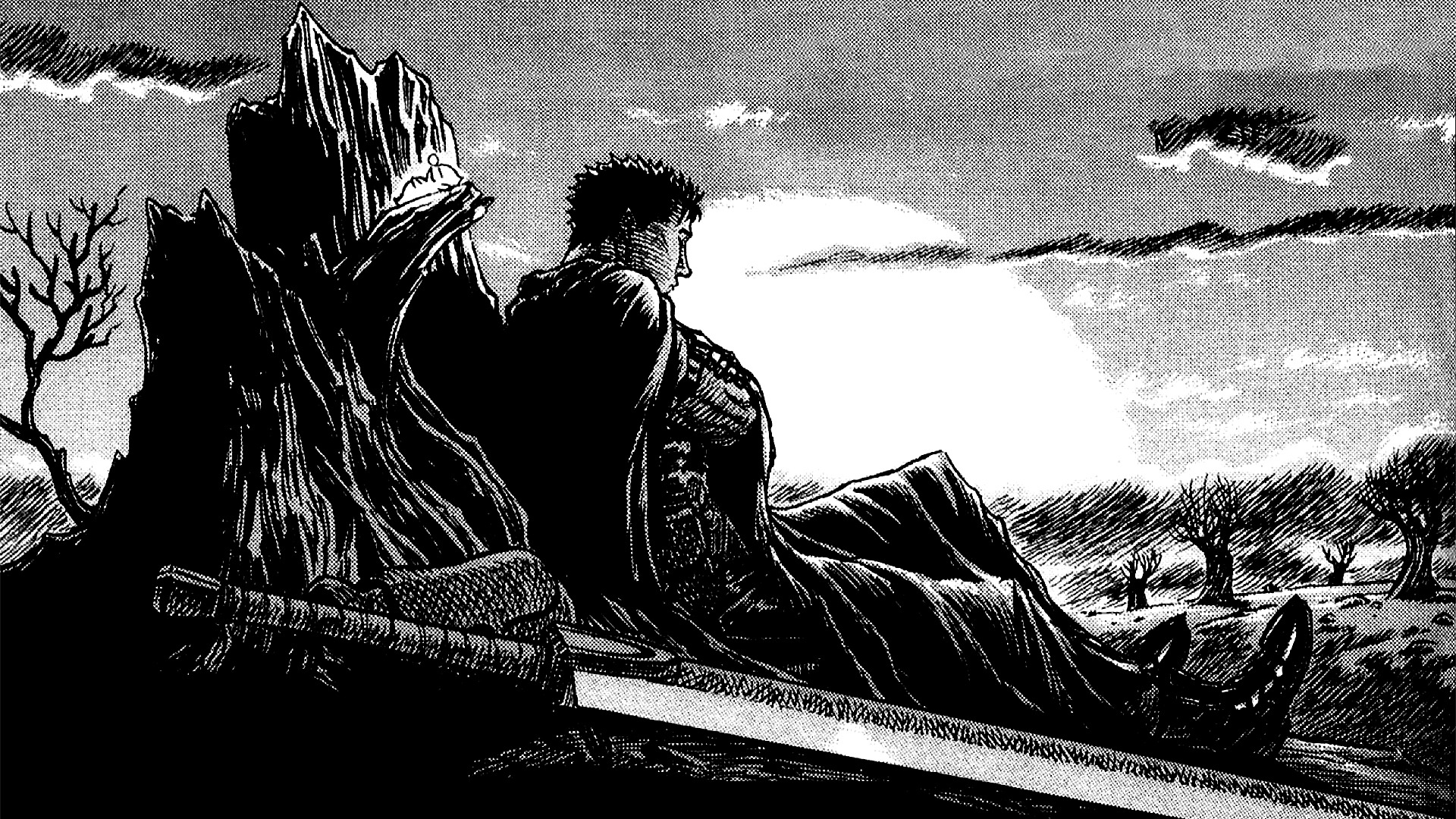 I don’t think I had ever been so immediately captivated with a story just after a few volumes. I was first exposed to Berserk through its 1997 anime adaptation, but it wasn’t until I picked up the manga shortly after then I really raved about how much of a masterpiece it is as a teen. My current feelings didn’t change much, even when there is a certain arc I didn’t like, though it is fairly compensated with Miura’s amazing artwork.

To talk about it may end up spoiling it for first timers, but if you are looking for an epic, low dark fantasy story that is beautiful and miserable at the same time, Berserk is for you. In the first arc, it may seem to be only about Guts’ angry vengeance against demons, but when you progress to the Golden Age arc, it is where the story really starts to shine. This is also the arc that attracted many that haven’t read or watched Berserk yet. 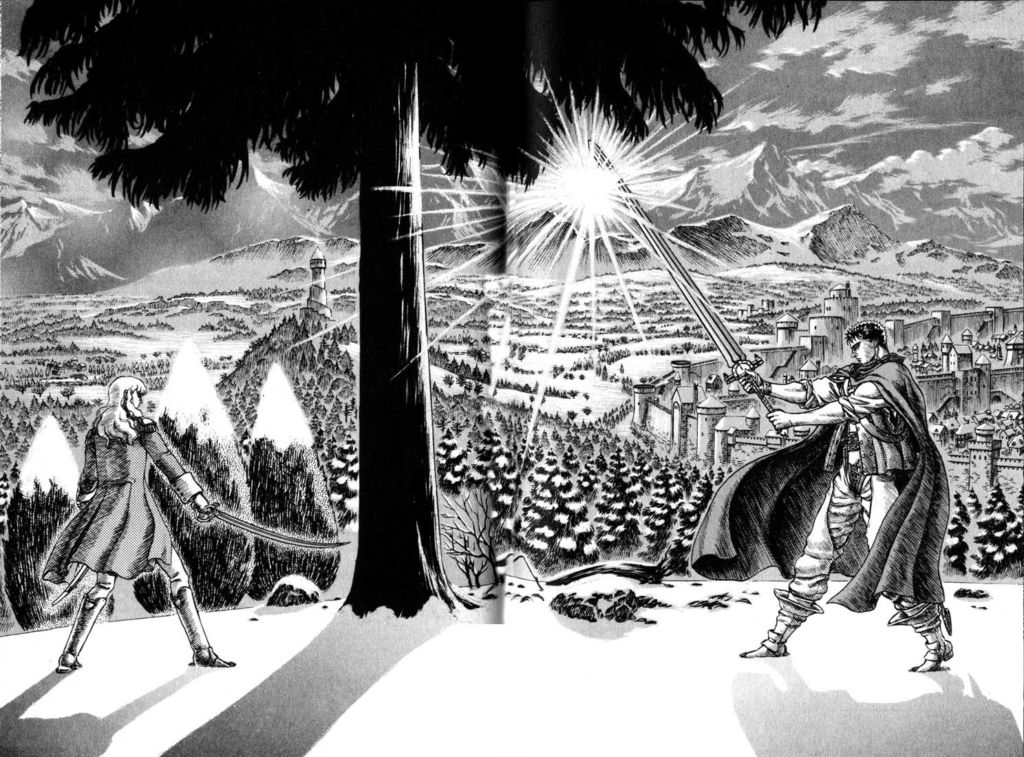 From the dialogues and personalities to their actions, the characters are also what keeps Berserk in the spotlight. There are many characters that I like, but none of them defined the series more than Guts and Griffith themselves. It is hard to imagine Berserk without them in the first place.

Guts is the main character that I looked up to so much, mainly because of his resistance to fate no matter how large the odds were against him. Despite his suffering, he kept going and fighting for his own sake and eventually his friends. While Guts fought against causality, Griffith selfishly flows with it. A stark contrast to Guts, he is beautiful, charismatic, and though he doesn’t wield a taller sword than himself, he also fights well. Despite his heroic imagery, he is deeply selfish when he was at the brink of pursuing his dreams, and in the end, threw away his former comrades to grasp it. Even when he finally achieved his own kingdom, I have a feeling that his dream is likely more than this, and it doesn’t just end there.

Guts and Griffith are the living definition of ying and yang, and Berserk will not stop until the two settle their differences either through death or some twist that Miura planned prior to his death, which may either make us readers enraged or left in great awe. 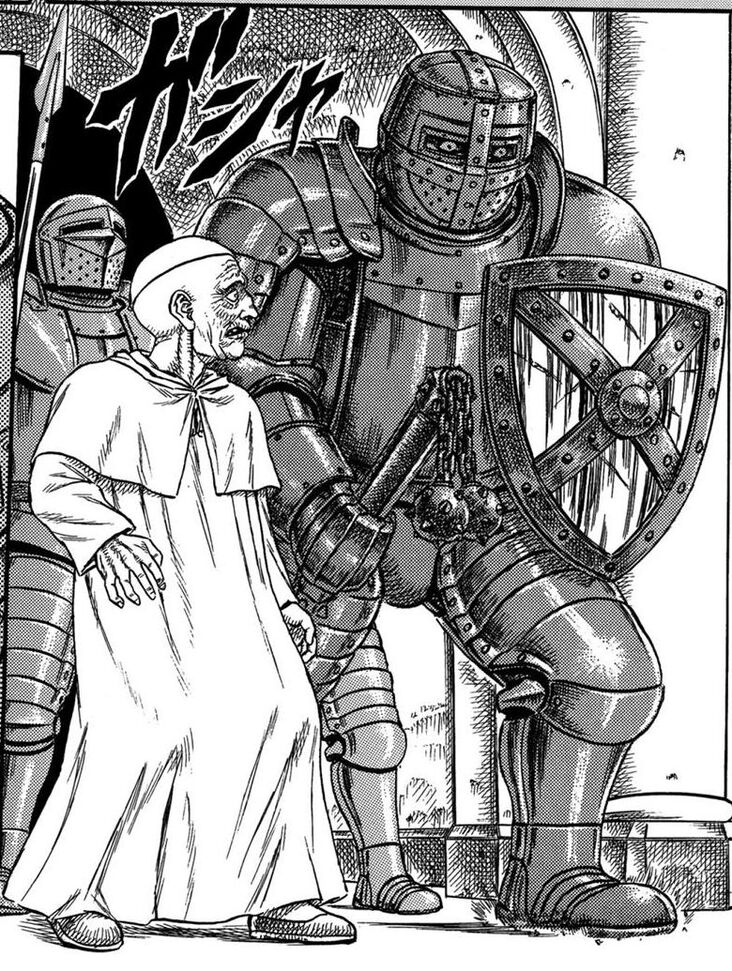 Berserk’s setting is another attraction that first drew me into the series. The low, medieval fantasy is realistic in the sense that no humans are black and white and even with the existence of monsters, many can be more menacing due to their awareness of evil’s consequence and still lack morality.

In Berserk’s world, not everybody is safe from danger, even a lot of the major characters. Death is a constant companion and even in peaceful periods, it still lingers. In the Fantasia arc, the fantastical beasts outside Griffith’s kingdom renders the wild more dangerous to traverse through.

Lastly, I fell in love with Berserk’s world because what is not more metal than a black armored mercenary fighting demons in the backdrop of a grimdark, medieval setting?